If you’re like us, you had many questions when the tragic news hit about stablecoin Terra losing its stability. And, of course, everything is happening amidst a chaotic global backdrop of record inflation, increased interest rates, a bear market, and global tensions.

The Terra story continues to develop rapidly, but to help demystify this moment, here’s a roundup of what we know of the complicated mess so far, in plain terms.

What is TerraUSD (UST)?

UST is a stablecoin pegged to USD that last week had $18 billion in circulation and was the third-largest stablecoin by market. Since then, its value has plummeted, with wide-reaching market effects.

Stablecoins are meant to be stable alternatives to other volatile cryptos that hold their value to fractions of a single percentage point.

How does this work? Typically, stablecoins, like USDC, are tied to a currency such as the dollar. To do so, they’re often backed by assets held in accounts with regulated financial institutions.

What sets Terra apart from traditional stablecoins, like Tether (USDT) and Circle (USDC), is that instead of fiat-currency-backing, UST is backed by another crypto, LUNA.

Terra is thus decentralized from traditional institutions. Instead of a central bank keeping control of the crypto’s supply, an algorithm changes the supply of UST and LUNA to keep UST’s price steady at its expected dollar value, or “peg.”

So, an almighty algorithm controls the supply of UST by burning coins from circulation. Here’s what you need to know about how it works.

Say you swap a UST coin for a LUNA coin. Your old UST coin is burned (taken from circulation) by an algorithm keeping an eye on both coins’ supply. The same goes for vice versa.

It makes sense in theory. If the UST value falls under a dollar, holders would then be motivated to swap their low-value UST for a dollar’s worth of LUNA. As more holders do this, more UST is burned, and as supply decreases, the value of UST will increase until it hits the dollar mark again.

Terra also uses a decentralized lending protocol on its blockchain called Anchor to stay on track. This protocol helps boost UST by offering higher interest rates for UST deposits, like the 20% it offered recently.

In the last week, UST has fallen sharply under its dollar value, to $0.62 this Monday. Now, it’s worth just pennies. On Tuesday, LUNA’s price fell to under $25, a far cry from its $115 value from just over a month ago.

Rumors are flying around, but nothing is confirmed as to how UST found itself untethered to the dollar.

Here are the facts:

Hundreds of millions of LUNA and UST were sold on Saturday across the exchanges. As a result, UST’s price sat at around $0.98.

However, as panic spread like wildfire, more and more holders tried to sell off and then found that Binance had halted withdrawals of UST and LUNA. OKX Exchange shortly followed suit.

Today, Binance cited “excessive volatility” for removing and updating the tick size (or minimum change in unit price) for trading pairs related to LUNA and UST. 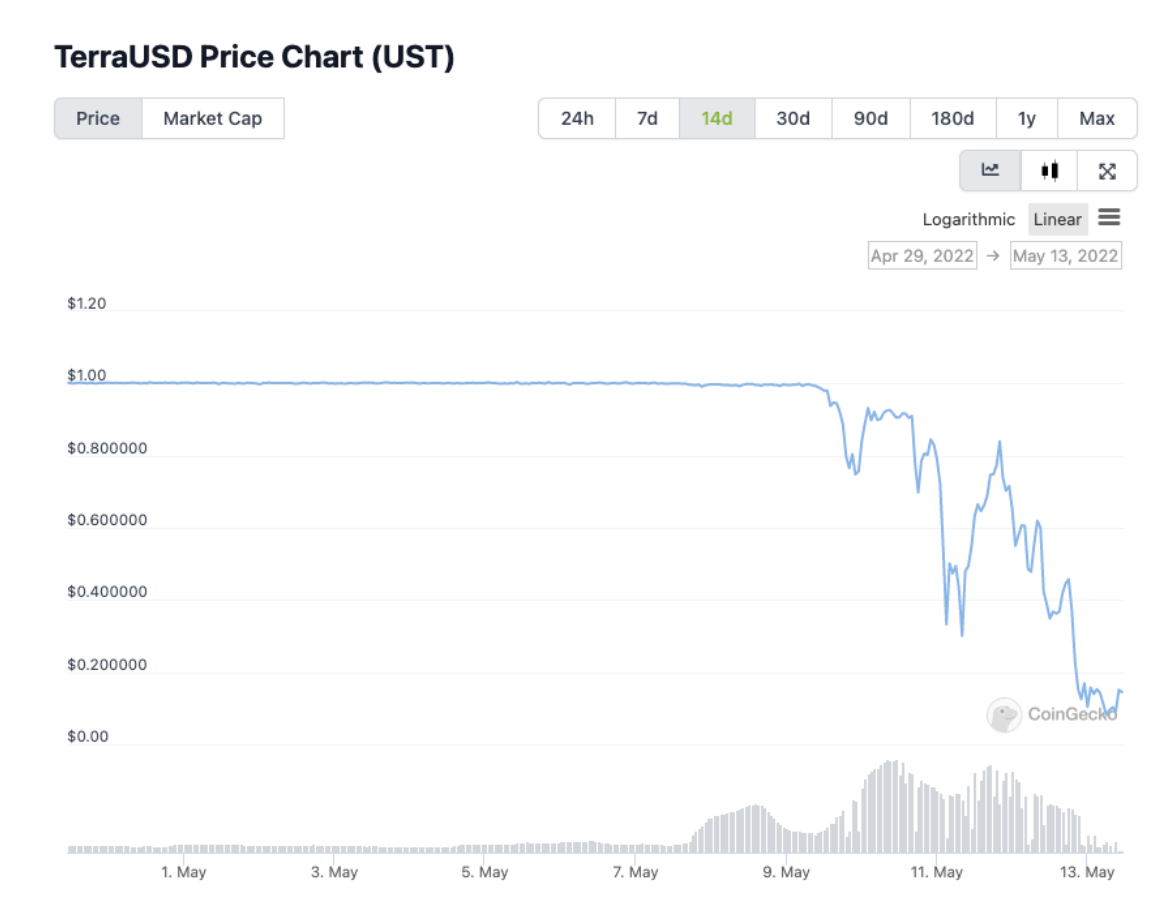 UST’s price in USD over the last 14 days. Source: CoinGecko. 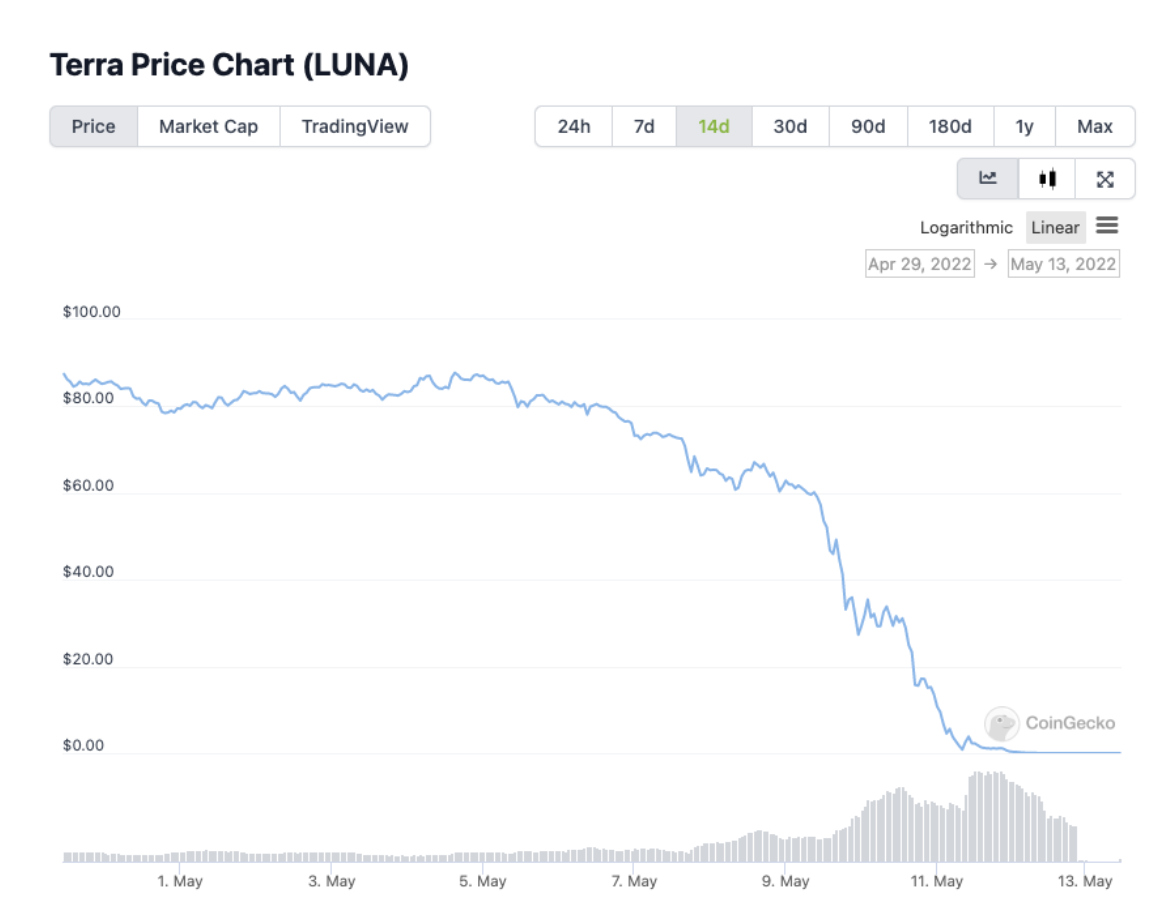 UST’s price in USD over the last 14 days. Source: CoinGecko.

To attempt to recover the $1 peg, the Luna Foundation Guard (LFG) nonprofit stepped in and lent out $1.5 billion in BTC and UST.

​​“Per the LFG’s mandate, the LFG will proactively defend the stability of the UST peg & broader Terra economy, especially under volatility and the uncertainty of macro conditions in legacy markets,” stated LFG in a Twitter thread.

Yet this move resulted in backlash, with some saying that LFG’s communication about its rationale was unclear. Others questioned why the nonprofit didn’t sell rather than loan the BTC.

With many calling the coin essentially “worthless,” some on Twitter have speculated that there was foul play afoot in engineering this disaster. Fingers have been pointed primarily at U.S. hedge fund Citadel, by CEO of Onchain Capital Ran Neuner, and others.

“This seems highly plausible given their anti- Bitcoin stance,” Neuner said. “Also, when [Terra CEO and Founder Do Kwon]/LFG publicized they would protect the peg at certain level it was an invitation to attack. Wall Street are experts at this.”

BTC trader Jacob Canfield offered the idea that Citadel borrowed BTC, traded it for UST, opened a short position, and then dumped off the BTC and UST to tank UST’s value. This theory that Citadel was shorting, or borrowing shares of an asset that’s believed to decrease in value, was reported by CryptoNews.com.

These aren’t the first murmurings of such attacks against a stablecoin, nor would it be the first successful shorting in history. This moment has prompted some to recall how Fir Tree Capital Management hedge fund aimed to short Tether (USDT) earlier in 2022.

Citadel, as well as big names like BlackRock and Gemini, have denied involvement in tanking the ecosystem.

It’s hard to tell. Coins can weather ups and downs and still have bright futures, and though UST is a stablecoin, it’s not immune to the risk or bull effects of the market. Time will tell is founder Do Kwon’s revival plan of reconstituting the chain and resetting ownership will bear fruit.

There’s precedent for a coin’s resurgence in market confidence. Tether (USDT) has fallen below its $1 mark multiple times, from $0.85 to 2018 to $0.90 in 2021. Despite these stumbles, Tether is today the largest stablecoins by market cap at $82 billion.

At the same time, it’s tough for any so-called stablecoin to recover its image after such a catastrophic crash, and it, unfortunately, fuels the “I told you so’s” from those in the “crypto is too risky” camp.

This crash has also led to critique not just of UST’s stability but its degree of decentralization. Crypto community members question the lack of transparency into the coin’s backing and how a “decentralized” coin is forced to rely on a council or a bailout from the founder.

Either way, it’s a sad time for LUNA and UST holders.

And, of course, the effects of this fallout aren’t isolated to these two coins. The ripples have been felt throughout the crypto ecosystem, with regulators are calling for action.

In understanding this issue, the relationship between UST and BTC is one to watch as UST has BTC reserves. Do Kwon, the founder of Terra/Luna bought 3.5 billion in BTC through the Luna Foundation Guard (LFG) to support the stablecoin and has declared ambitions to hold the second-most BTC in the world through the company (second only to BTC founder Satoshi Nakamoto).

Some analysts believe, according to the Wall Street Journal that BTC’s 10% drop this Monday happened as a result of holders fearing that LFG might sell off and flood the market.

LUNA has a price of $0.00004670, and comes with a similar warning from CoinGecko: “In light of the recent de-pegging incident of UST, Luna price and liquidity have become unstable across exchanges.”